By Clarissa Brocklehurst, Chief of Water, Sanitation and Hygiene, UNICEF

In September 2000, world leaders came together to commit their nations to a new global partnership to reduce extreme poverty.  They set out a series of time-bound targets - with a deadline of 2015 - that have become known as the Millennium Development Goals:

Perhaps no set of interventions underpins the attainment of these Millennium Development Goals more critically than water, sanitation and hygiene.  Water supply and sanitation targets were included in MDG 7, calling on the world to reduce by half the proportion of people without access to water and sanitation. However, the impact of water and sanitation is felt across many sectors, impacting several MDGs.  Water scarcity, degrading water quality, lack of access to both adequate sanitation and clean drinking water, and poor hygiene increase disease, contribute to malnutrition, disadvantage women, undermine economic growth, and threaten development, peace and security.

Let’s start with health. The disease burden caused by poor water, sanitation and hygiene is significant. For instance, soil transmitted helminthes (hookworm, roundworm, ringworm) infest approximately two billion people. Shistosomiasis infects and debilitates 200 million people. Trachoma, a disease related to poor sanitation and hygiene which can cause blindness, infects five million people. However, the most serious health impact of poor WASH is diarrheal disease, particularly on children. It is estimated that there are 2.5 billion cases of diarrhea every year, mostly among children under two, and that this results in 1.5 million child deaths every year, of which 88% are attributable to poor water, sanitation and hygiene (WHO 2002, UNICEF 2006).

But the impacts of water, sanitation and hygiene go beyond disease.  WASH conditions are also a determinant of nutritional status.  One multi-country analysis showed that improvements in sanitation were associated with height increases among children (Esrey 1996), and it is estimated that 25% of all stunting in 24-month old children is attributable to having five or more episodes of diarrhoea (Checkley et al 2008). It is hypothesized that a key cause of child undernutrition is a subclinical disorder of the small intestine known as tropical enteropathy, caused by faecal bacteria ingested in large quantities by young children living in conditions of poor sanitation and hygiene (Humphrey 2009).

Inadequate access to water and sanitation also hinders progress on achieving gender equality. In most households, women and girls are the primary carriers of water, and often need to travel more than 30 minutes round trip to collect water (see Figures 1 and 2). This is particularly true in Sub-Saharan Africa. The resultant ‘time-poverty’ of women and girls reinforces inequalities within households and communities; creating barriers for women and girls in terms of schooling, time to care for young children, literacy, rest, leisure, and opportunities to participate in the development of their communities. 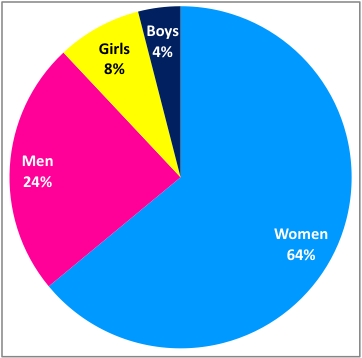 Figure 1. Distribution of those in the household who usually collect drinking-water, from surveys in 45 developing countries, 2005-2008 (WHO & UNICEF 2010). 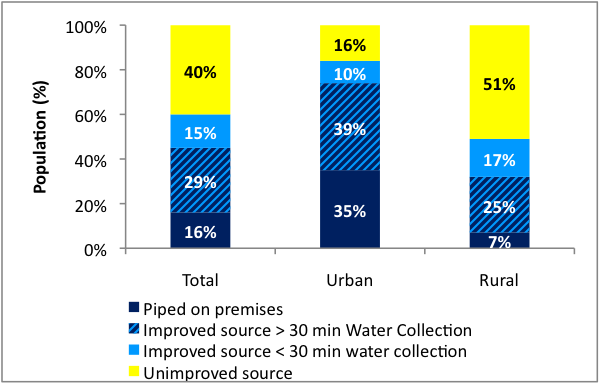 Figure 2. In Sub-Saharan Africa, one third of the improved drinking-water sources that are not piped on premises need a collection time of more than 30 minutes (WHO & UNICEF 2010).

Girl children risk being deprived of the opportunity to attend school because of their water collection responsibilities.  Girls are also more likely to drop out of school, and their parents are more likely to withdraw them, if schools lack appropriate sanitation facilities which offer privacy and dignity (Redhouse 2004, UNGEI 2003). The barrier to girls’ education created by a lack of safe and private school toilets is particularly tragic in the light of the enormous development impact educating girls has been shown to have.

Investments in sanitation and drinking water lead to increased economic productivity, and underinvestment is a drag on progress. For instance, Inadequate sanitation imposes a high economic cost through impacts on health and tourism, and the time and treatment costs as a result of distant access to facilities and poor water quality. In India alone it has been estimated that inadequate sanitation has an economic impact of a staggering $53.8 billion per year – equivalent to 6.4 percent of India’s GDP in 2006 (WSP, 2011). It is estimated that for every $1 invested in sanitation, an average of $9 is returned in increased economic development (UNDP 2006). Meeting the sanitation and drinking water targets by 2015 (which would still leave millions un-served) would have an annual economic benefit of $38 billion to developing countries (Hutton et al 2007).

Water, sanitation and hygiene have also been shown to be highly cost-effective investments.  For instance, an analysis of the cost effectiveness ratio of a number of interventions against diarrheal disease shows that WASH interventions, particularly those based on promotion, have low costs per DALY[1] compared to vaccination interventions, or treatment, such as oral rehydration, once diarrhea has been contracted (Jamison et al 2006) (see Table 2).

Yet water, sanitation and hygiene still receive insufficient global attention.  While progress towards the achievement of the MDG target for water is on-track for many regions of the world, the world lags far behind on the sanitation target, which is predicted to be missed by over one billion people (WHO & UNICEF 2010). 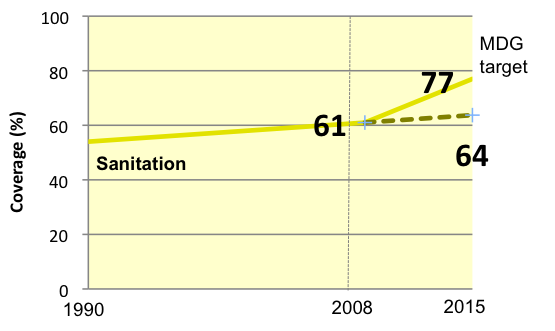 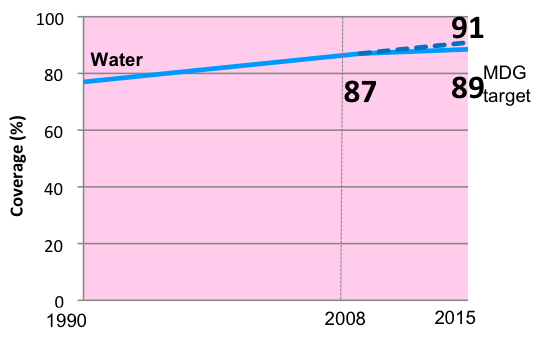 Figure 4. Progress towards the MDG target for water

And if we examine the apparently good progress on water supply more carefully, we see that it is very uneven.  Rural water supply lags badly behind urban, and in certain regions, particularly sub-Saharan Africa, rural coverage is still very low.

Figure 5. Use of improved drinking-water sources in urban and rural areas by region (WHO & UNICEF 2010)

Likewise, there is significant variation in coverage of sanitation by region.  South Asia, one of the world’s most populous regions, has only 57% sanitation coverage in urban areas, and 26% coverage in rural areas.  In India there are 880 million people who have no sanitation at all, and practice open defecation.

Figure 6. Use of improved sanitation in urban areas in urban and rural areas by region (WHO & UNICEF 2010). 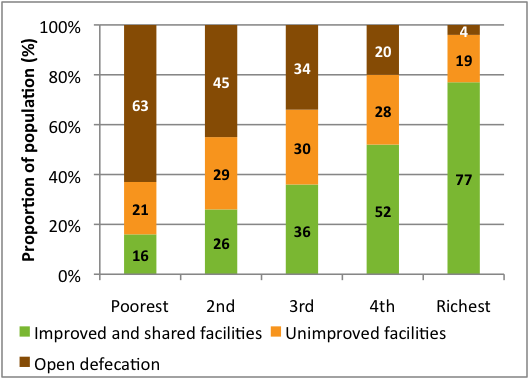 While water supply is not as inequitably distributed as sanitation, in Sub-Saharan Africa the richest quintile is twice as likely to use an improved drinking water source as the poorest. And we must note that that availability of piped water on the household premises is largely the privilege of the rich, with very few poor people having access to this level of service that offers so many health and time-saving benefits (WHO & UNICEF 2010).

Figure 8. Proportion of the population using drinking-water piped on premises, other improved drinking-water source or an unimproved source, by wealth quintile, Sub-Saharan Africa (WHO & UNICEF 2010).

So what is needed?  We need low cost interventions that reach the poorest and most vulnerable, and we need them at enormous scale.  We need to improve access to safe water supply, increasing the number of water supply points and reducing their distance from people, in order that the health benefits can be realised, and that the burden of water collection can be lifted from women and girls.  But even more urgent is the need to vastly increase sanitation coverage.

However, the experience of the sector is that sanitation and hygiene are often neglected by donors and governments.

Recent analyses of investment flows show that both donor aid and developing country national budget allocations in the sector are not well targeted to achieve the MDGs.  For example, despite significant increases in investments going into the sector, only 42% of sector aid goes to low income countries (Figure 9) , and only 16% is invested in “basic” systems that primarily serve the unserved (Figure 10) (WHO 2010).  The flow of assistance into the sector thus matches the outcomes – the poorest countries receive little assistance, and the poorest within those countries continue to be excluded. 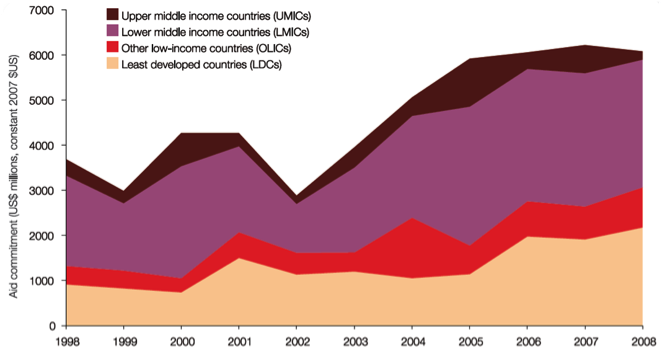 Developing country governments also often lack the institutions and political will to make water, sanitation and hygiene a priority.  Sanitation in particular tends to be an “institutional orphan”, with many ministries (health, rural development, water resources) sharing – and often avoiding – responsibility for a sector many don’t like to discuss.  Likewise, for water supply, there is often inadequate coordination between the parts of government worrying about sustainability of water as a resource, and those tasked with designing delivery systems.  Many governments lack robust plans for developing their water and sanitation sectors, and for attracting investment by donors and development banks.

The pressing need to prioritise the scaling-up of appropriately designed and targeted investment in the sector is the broad aim of Sanitation and Water for All (SWA), a global partnership of developing countries, donors, multi-lateral agencies, civil society and other development partners. The partnership has agreed that its immediate focus should be on meeting the Millennium Development Goals in the most off-track countries. Launched in 2010, Sanitation and Water for All has already convened its first high-level meeting of global decision-makers. Hosted by UNICEF, the meeting established the partnership’s broad approaches: improve mutual accountability for delivery on sector commitments, improve sector information to facilitate evidence-based decision-making, and the provision of technical assistance (Sanitation and Water for All, 2011).

Due to the links with health, nutrition, equity, gender equality and economic progress, water, sanitation and hygiene underlie not only the achievement of the MDGs, but also overall long-term development.   Clean water is thus a pre-condition for development, but so is abundant water close to home, sanitation which facilitates not just health but also dignity, and empowering hygiene education.  Without these, progress in development will falter, people will not be given opportunities to exercise their rights, and investments in other sectors will be lost.

Countries in the developed world made huge investments in environmental and living conditions in the last two centuries, and reaped the benefits.  But in the developing world these are happening too slowly, and water, sanitation and hygiene are often overlooked in favour of large investments in specific diseases.  In order to optimize the investments made in health, and also in education, we must make the fundamental investments in the humble realm of taps, pumps, pipes, toilets and handwashing promotion.  A resurgence of interest in water, sanitation and hygiene will herald an era in which they provide one of the foundations of development.

IRC, 2007.Towards Effective Programming for WASH in Schools: a manual on scaling up programmes for water, sanitation and hygiene in schools. Tech. no. 48. Delft: IRC International Water and Sanitation Centre.

Sanitation and Water for All, 2011. [accessed online 2 March 2011]  http://www.sanitationandwaterforall.org/home.html

UNICEF, 2006. Progress for Children: a report card on water and sanitation. UNICEF.

[1]  Disability-Adjusted Life Year, a  measure of overall  disease burden, expressed as the number of years lost due to ill-health, disability or early death.

The Right to Water: A Briefing Note