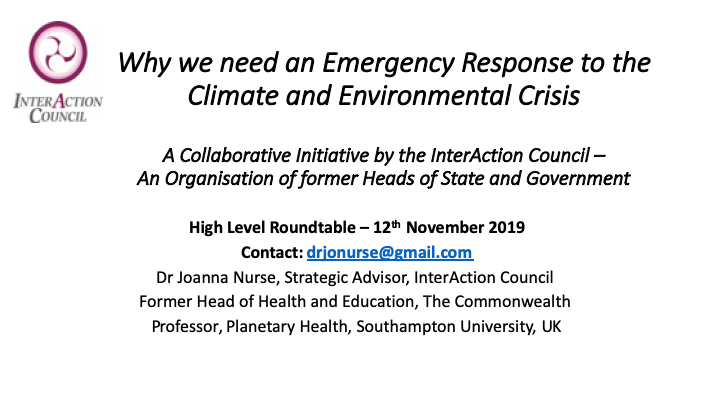 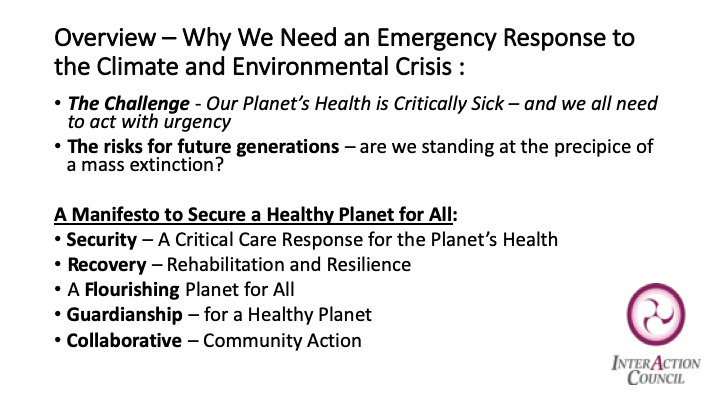 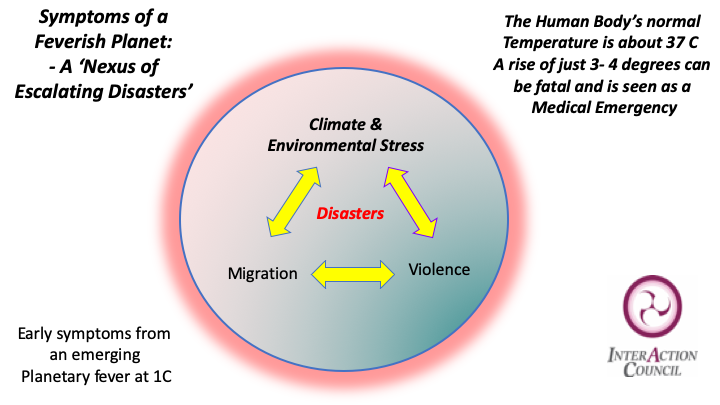 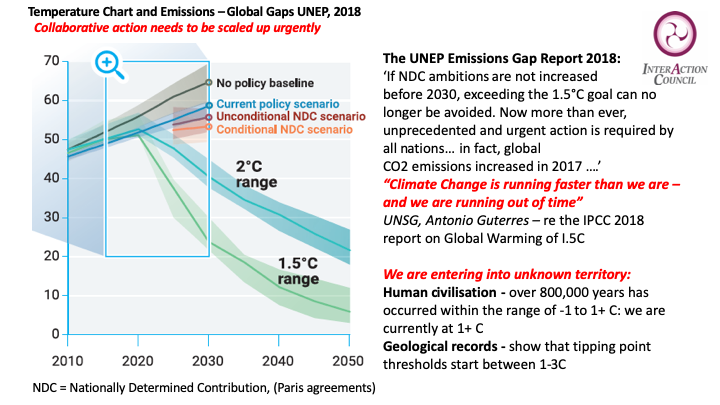 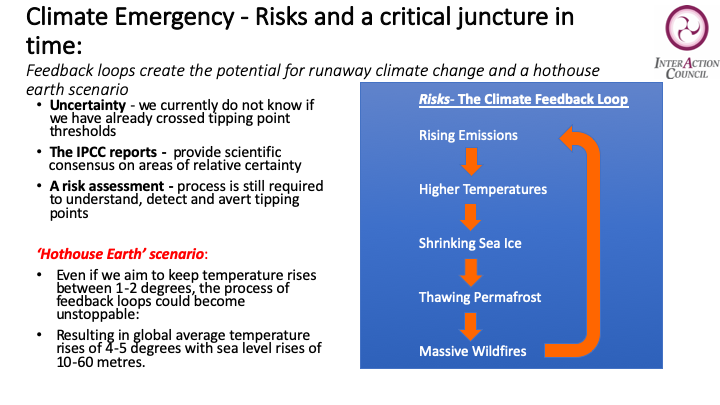 Due to cumulative historic emissions and carbon sinks:

Estimates for permanent sequestration of up to 1000 Gigatons of Carbon Equivalent, may be required to keep within safe temperatures, (Walsh, 2017)

Anthropogenic emissions need to peak within the next 10 years, to maintain realistic pathways to meeting the COP21 emissions and warming targets, (Walsh, 2017) 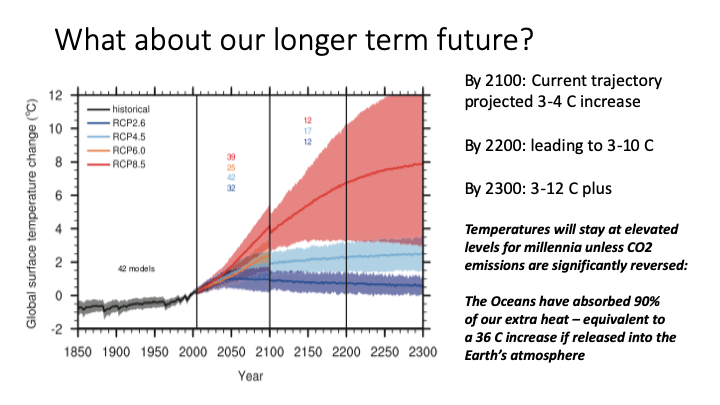 Temperature change will not be regionally uniform.

It is virtually certain that, in most places, there will be more hotand fewer cold temperature extremes as global mean temperatures increase.

Mean sea level pressure is projected to decrease in high latitudes and increase in the mid-latitudes as global temperatures rise. In the tropics, the Hadley and Walker Circulations are likelyto slow down.

Changes in the Water Cycle

It is virtually certain that, in the long term, global precipitation will increase with increased global mean surface temperature.

Changes in average precipitation in a warmer world will exhibit substantial spatial variation. Some regions will experience increases, other regions will experience decreases and yet others will not experience significant changes at all. There is high confidence that the contrast of annual mean precipitation between dry and wet regions and that the contrast between wet and dry seasons will increase over most of the globe as temperatures increase.

Annual surface evaporation is projected to increase as global temperatures rise over most of the ocean and is projected to change over land following a similar pattern as precipitation.

It is very likely that the Arctic sea ice cover will continue shrinking and thinning year-round in the course of the 21st century as global mean surface temperature rises. At the same time, in the Antarctic, a decrease in sea ice extent and volume is expected, but with low confidence.

Changes in the Ocean

The global ocean will warm in all RCP scenarios.

Global temperature equilibrium would be reached only after centuries to millennia if RF were stabilized.

A large fraction of climate change is largely irreversible on human time scales, unless net anthropogenic CO2 emissions were strongly negative over a sustained period.

The principal driver of long-term warming is total emissions of CO2 and the two quantities are approximately linearly related. The global mean warming per 1000 PgC (transient climate response to cumulative carbon emissions (TCRE)) is likely between 0.8°C to 2.5°C per 1000 PgC, for cumulative emissions less than about 2000 PgC until the time at which temperatures peak.

To limit the warming caused by anthropogenic CO2 emissions alone to be likely less than 2°C relative to the period 1861-1880, total CO2 emissions from all anthropogenic sources would need to be limited to a cumulative budget of about 1000 PgCsince that period. About half [445 to 585 PgC] of this budget was already emitted by 2011. Accounting for projected warming effect of non-CO2 forcing, a possible release of GHGs from permafrost or methane hydrates, orrequiring a higher likelihood of temperatures remaining below 2°C, all imply a lower budget.

Some aspects of climate will continue to change even if temperatures are stabilized.

Several components or phenomena in the climate system could potentially exhibit abrupt or nonlinear changes, and some are known to have done so in the past.

International Union for Conservation of Nature:

‘A useful analysis undertaken by the Grantham Institute1 in 2015 concluded that if the same amount of heat that has gone into the top 2000m of the ocean between 1955-2010 had gone into the lower 10km of the atmosphere, then the Earth would have seen a warming of 36°C’

- Acting quickly to keep future options open. The concerns among the scientific community that as atmospheric CO2 increases, the options for the ocean (i.e. mitigate, protect, repair, adapt) become fewer and less effective must now be recognized.

- Achieving rapid and substantial cuts in greenhouse gases Greenhouse gas mitigation at the global scale appears to be the overarching solution. 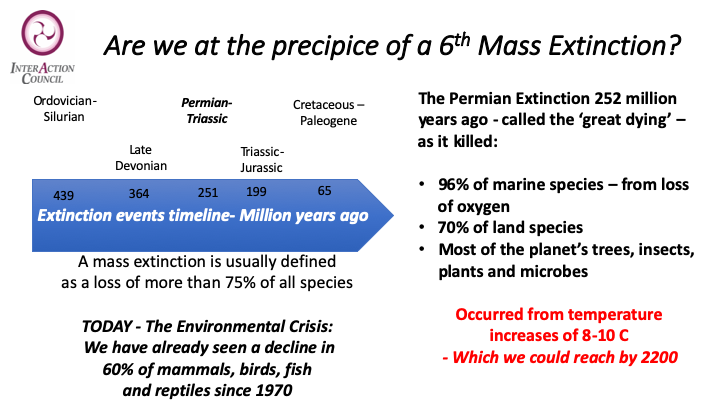 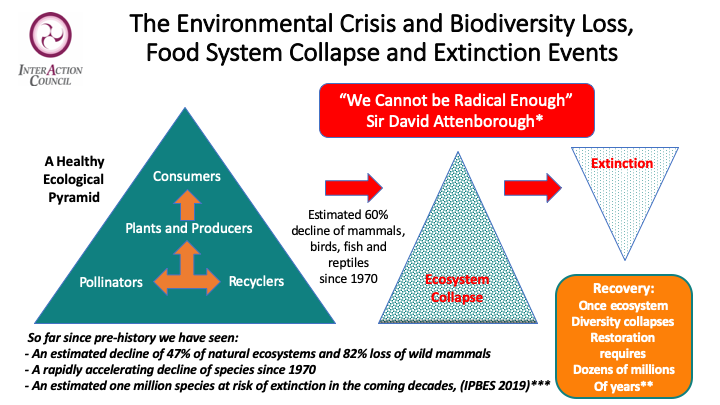 Johan Rockstrom, previous Director of the Stockholm Resilience Centre and current Director of the Potsdam Institute for Climate Impact Research, recently stated that by 2100 with our current trajectory of 4°C, that“It’s difficult to see how we could accommodate a billion people or even half of that”(Guardian Weekly, 31 May 2019). 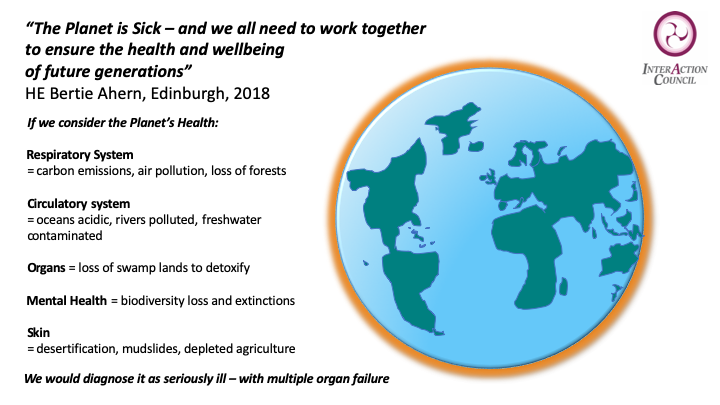 In some respects, humans have inadvertently acted like a cancer, feeding upon resources, and expanding without due regard for the harm we are causing to the rest of our home, Planet Earth.

Note: the Planet = Eco-systems and Biodiversity, including all life forms

If we consider the Planet’s Health:

Fever = escalating temperature - 1 Centigrade now, rapidly rising to 3-4C by 2100 and 3-10C by 2200 – a temperature of 3-4C is considered a medical emergency and risks fatally in humans

Respiratory System= breathing shallow and strained - escalating carbon emissions with C02 at 411ppm; air pollution dangerously high, with 91% of places exceeding WHO guidelines; wildfires and continued loss of global forests from 31.6% of land area in 1990 to 30.6% in 2015;

Cardiovascular system= rapid pulse, acidosis, toxic and high blood pressure - oceans 30% increased acidity, having absorbed 50% of post industrialcarbon emissions and 90% of the excess heat - equivalent to 36C when released back to the atmosphere; pollution with toxins and plastics; freshwater scarcity

Mental Health= in a coma with biodiversity loss at 60% for mammals, birds, fish and reptiles since 1970 – nearing the threshold for extinction at 75% loss

As physicians, we would diagnose an escalating fever with a critical risk of multiple organ failure and send ‘Patient Planet’ straight to Critical Care 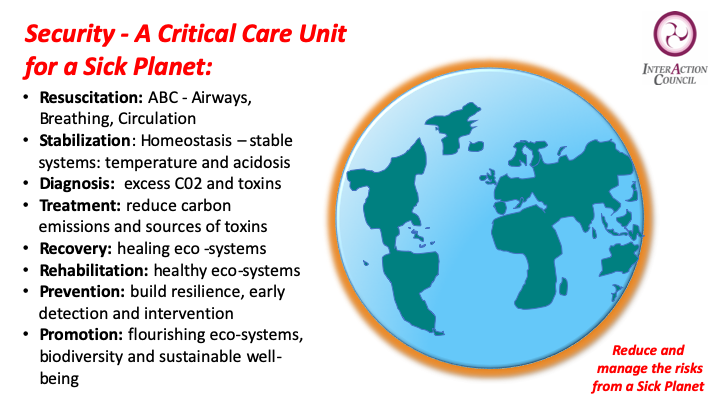 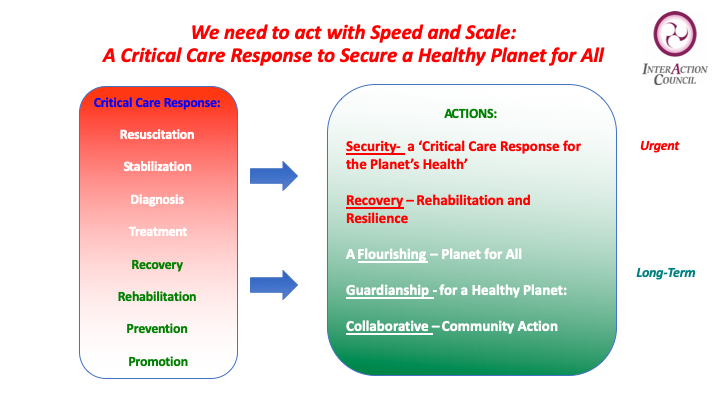 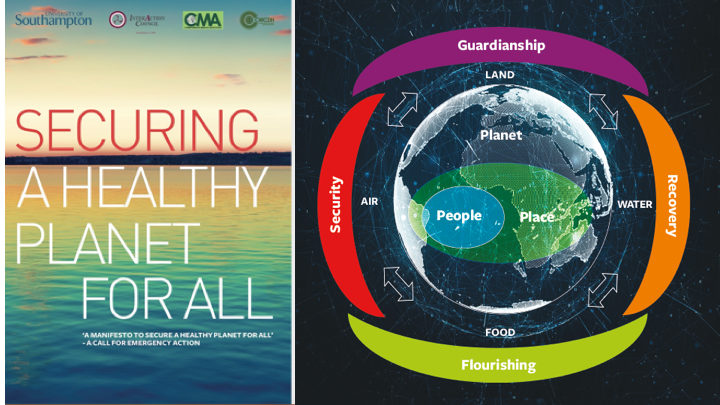 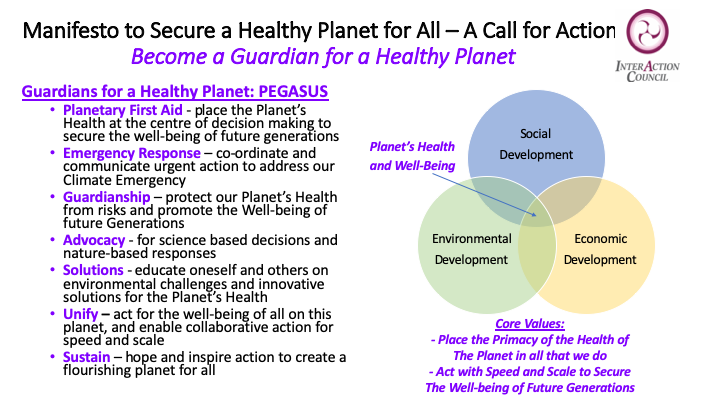 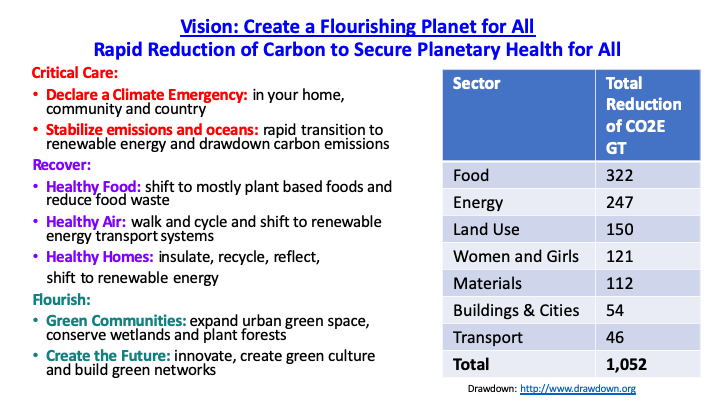 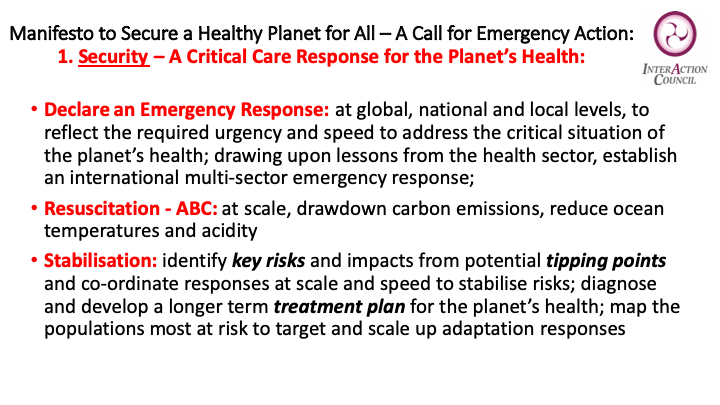 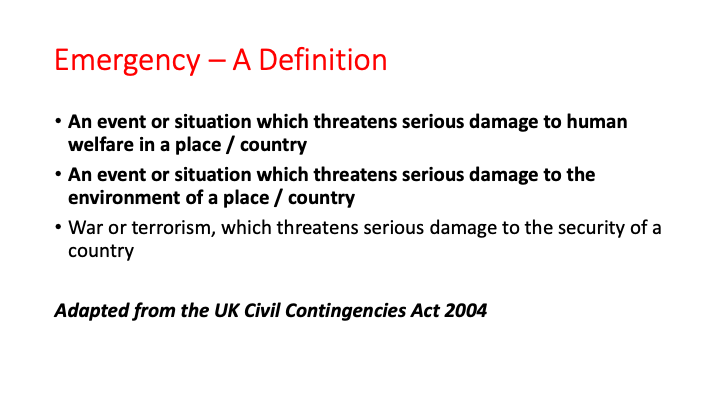 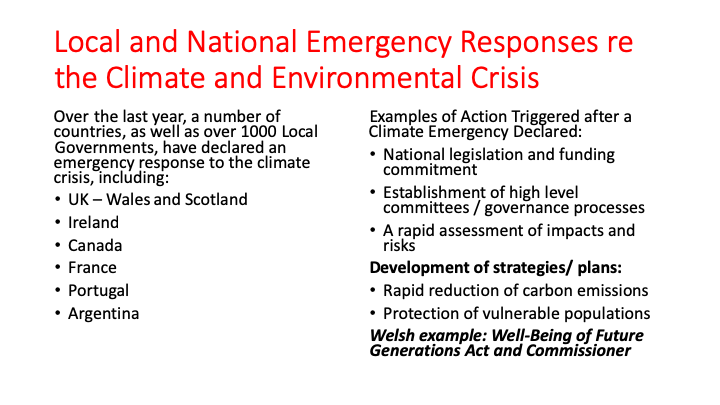 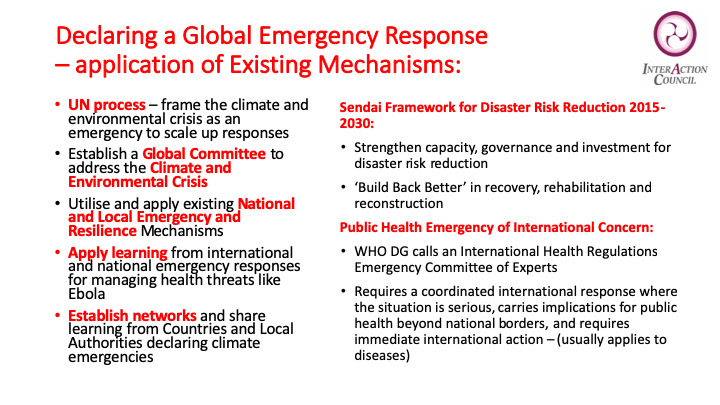 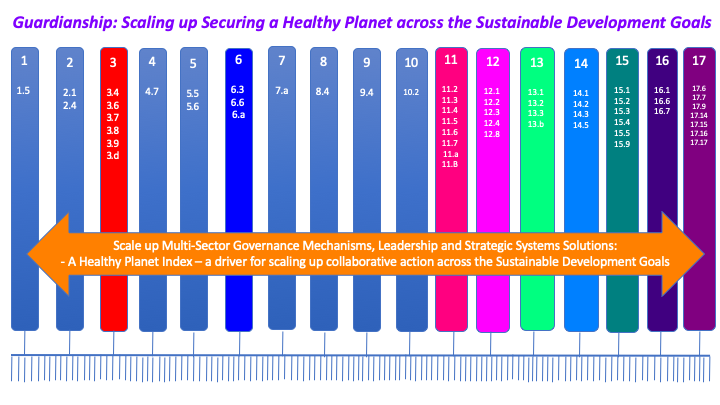 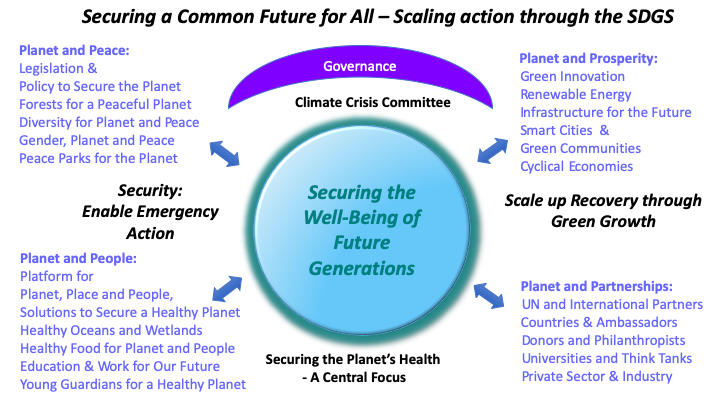 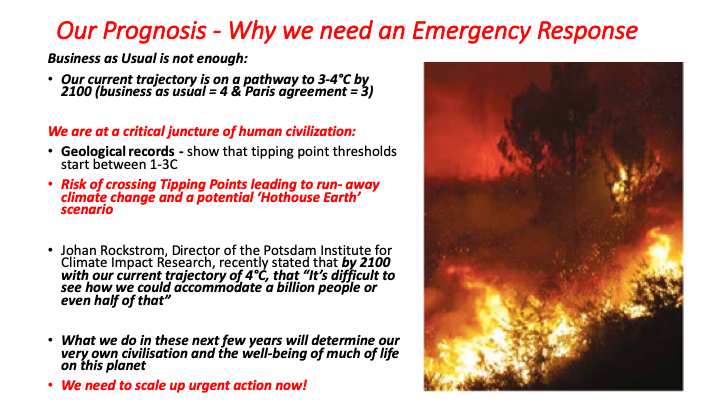 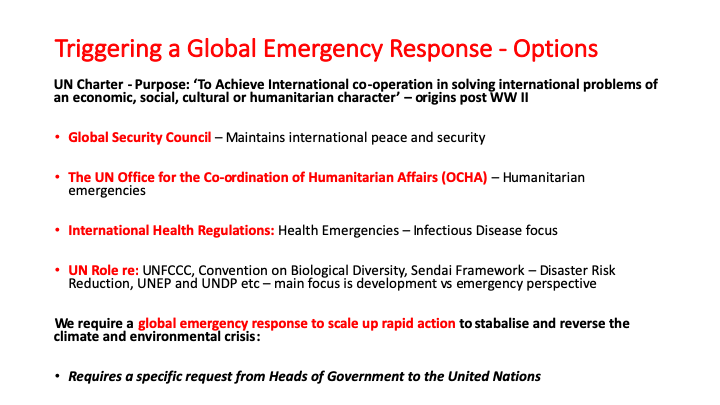 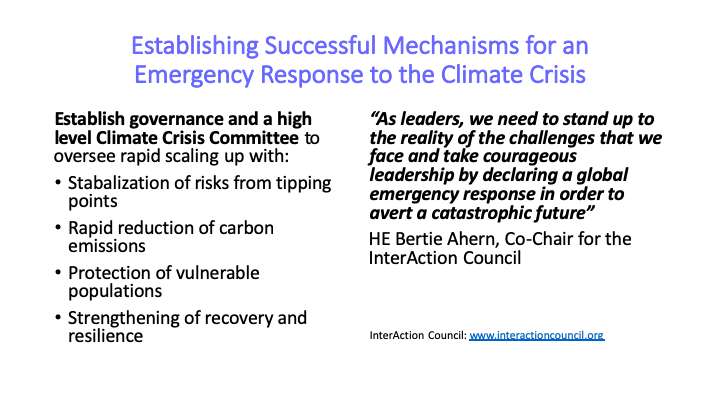 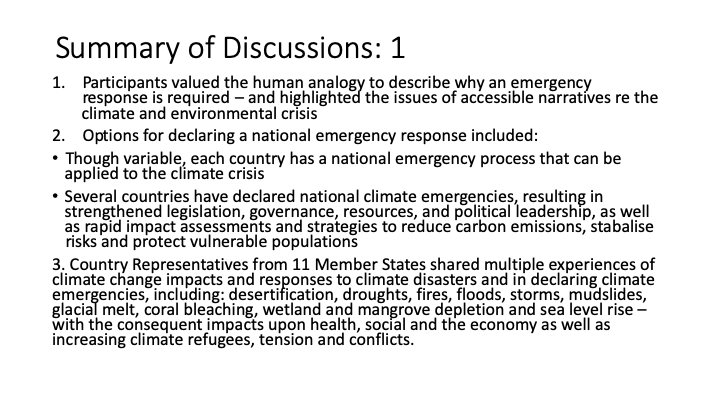 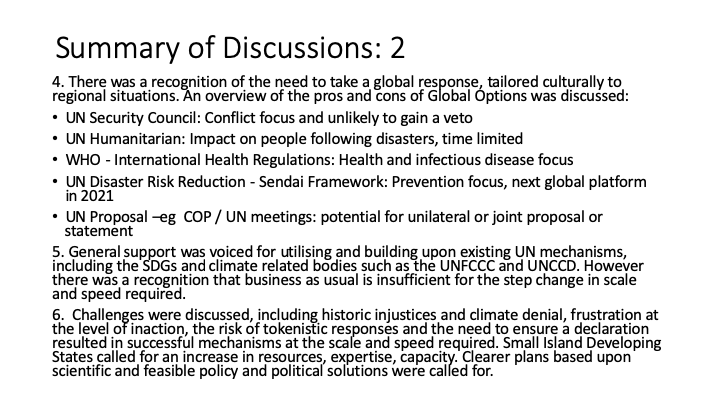 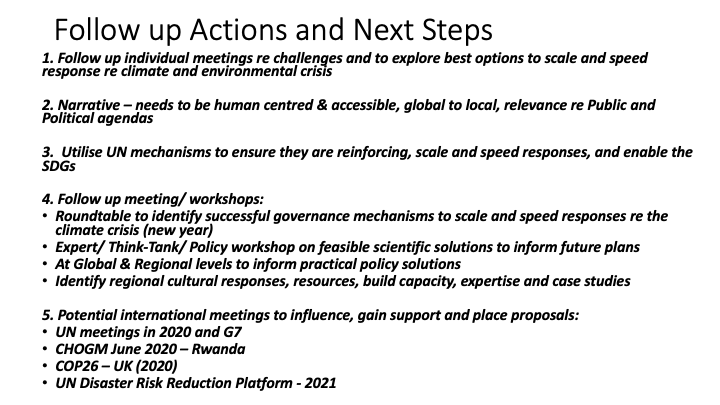 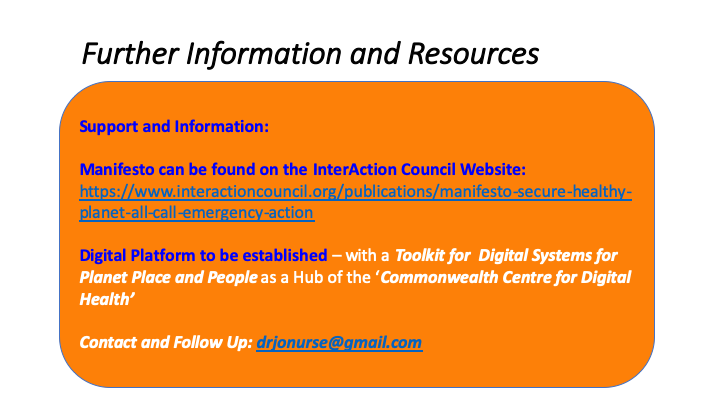