The key point here is “Frequent.” The trend of environmental monitoring is from Static to Dynamic to Instant

The last one leads us to the second slide 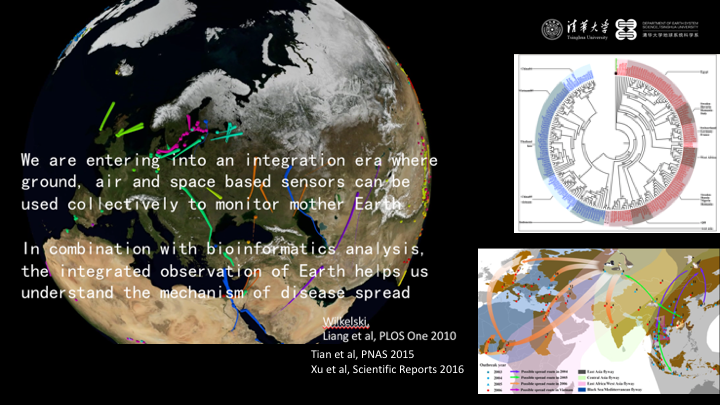 Monitoring of the environmental conditions of migratory birdsstaging, wintering, stopover locations, we can install loggers to get time and location but not the surrounding environment, e.g., videography and sound recorders

Why such information is important? They tell us about the food preference, habitat preference, the direct confrontation among animals when diseases can be easily transferred

In our department we developed global mapping and analysis tools to study the spatial-temporal clustering of wild birds, combined their phylogenetic patterns to understand disease spreading – e.g., how the H5N1 virus has been transmitted among wild birds, from where to where, we are still not clear about the exact mechanism 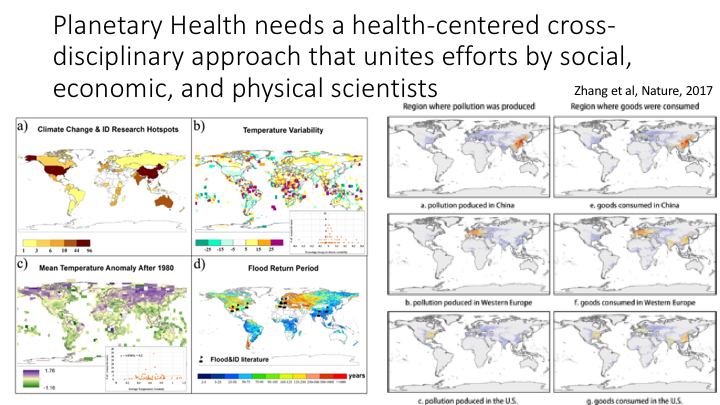 The left four figures shows our literature synthesis on studies about climate change and infectious diseases, we found a spatial mismatch between the areas of greatest CC and research on infectious diseases; we need to better synchronize and coordinate our interdisciplinary efforts.

The right figures is the latest research by my colleague Qiang Zhang that will soon appear in Nature, the annual premature deaths caused by PM2.5 pollution embodied in international trade. This involves collaboration among Earth scientists, health researchers as well as economists, a collaboration between China, UK and US scholars. 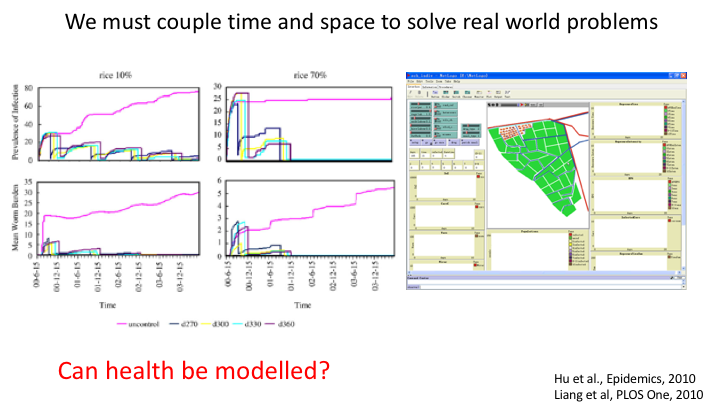 What about those who model the temporal dynamics of avian influenza transmission without explicit consideration of space? That type of information is blind because they lost spatial connectivity. Clearly, coupling both time and space is necessary, they allow us to simulate different prevention and control scenarios and obtain the optimal one. This example is schistosomiasis control modeling and trying to understand the effect of land use change on the level of disease epidemics. The questions is “can health be modelled?” 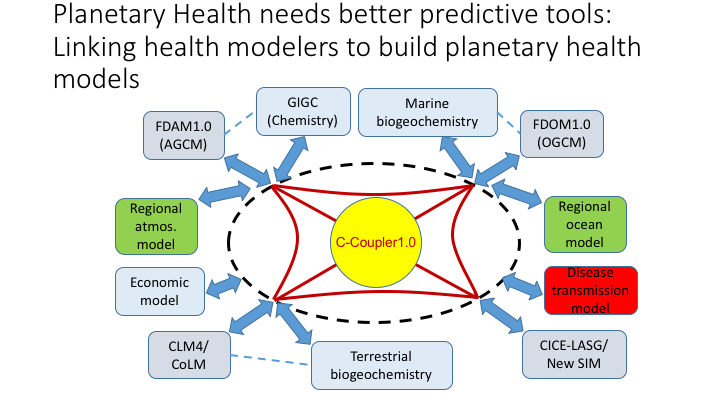 We need predictive models, yes they are notaccurate enough at present, this is exactly why we need to devote our efforts. If we can forecast the famine in those four countries a few months ahead of time, we could prevent starvation for many.

IPCC has been making efforts to model climate and the physical Earthsystem, some economics have integrated economic models into simple version of Earth system models, can we couple disease transmission models into these efforts. One task we have at Tsinghua is to try to do this. 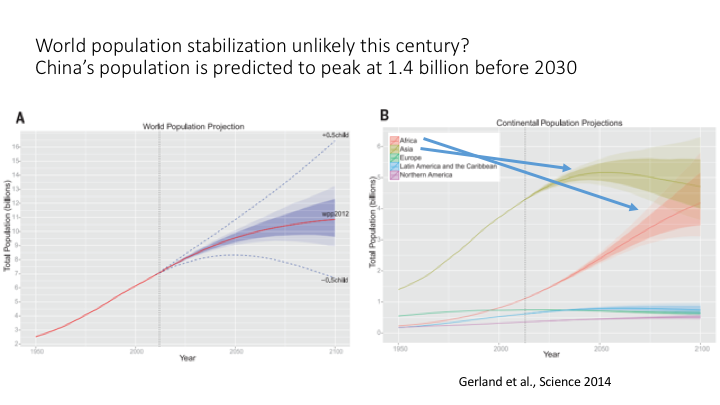 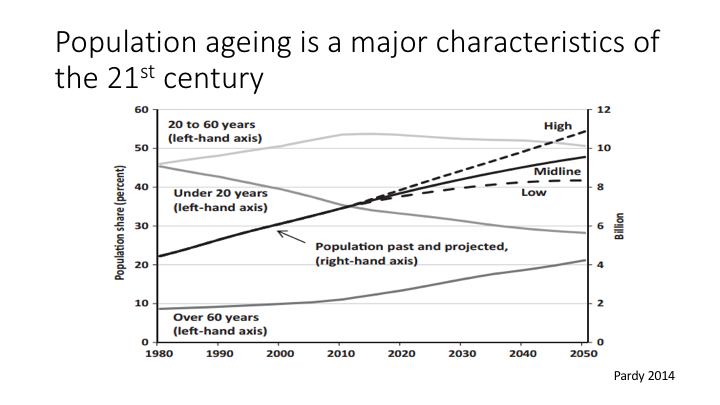 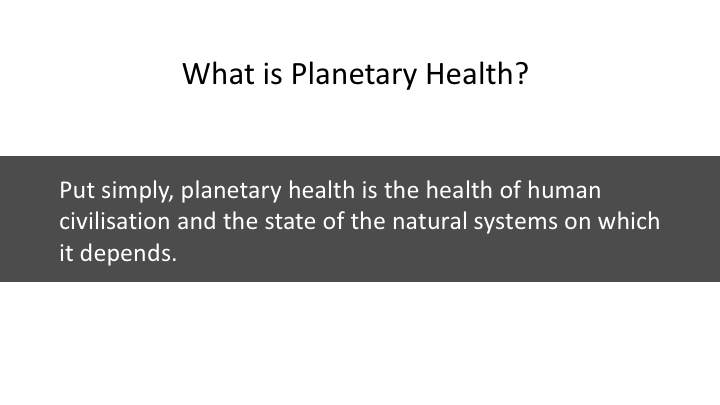 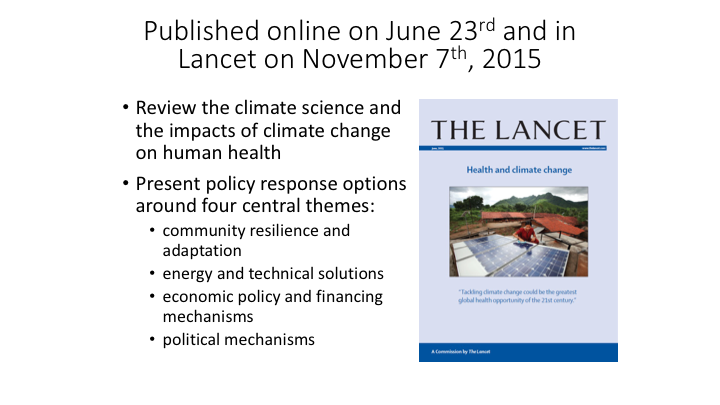 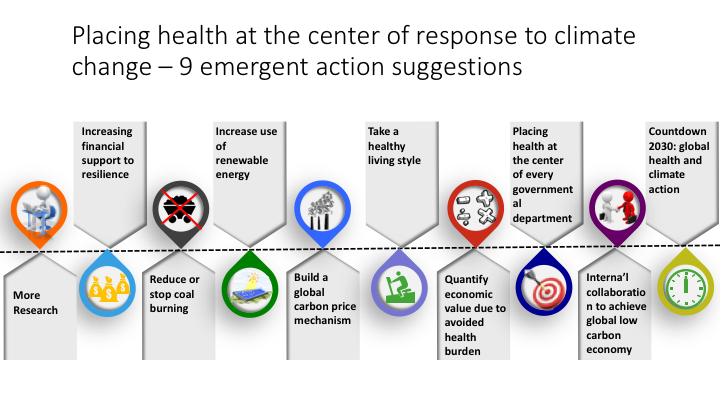 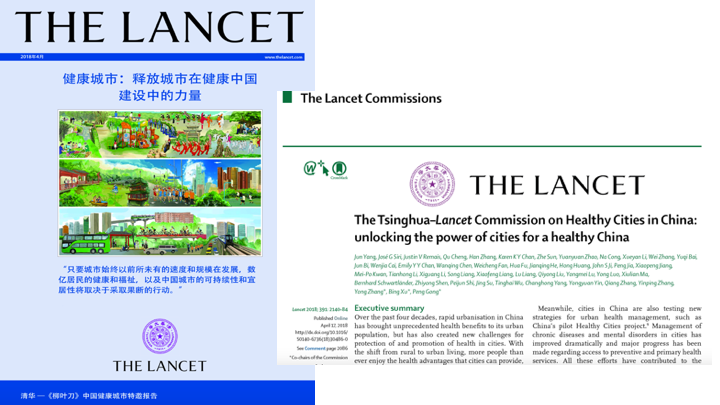 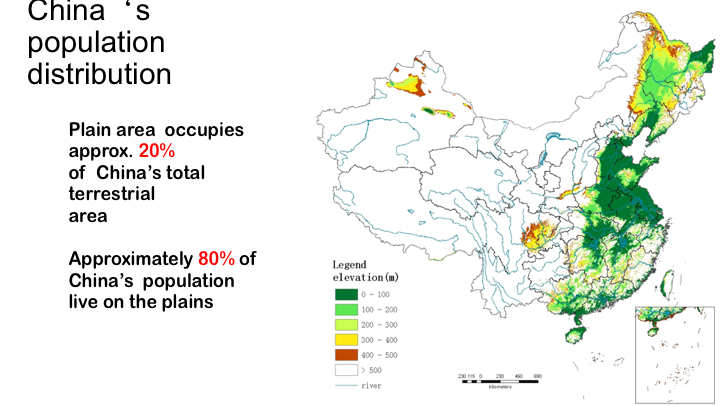 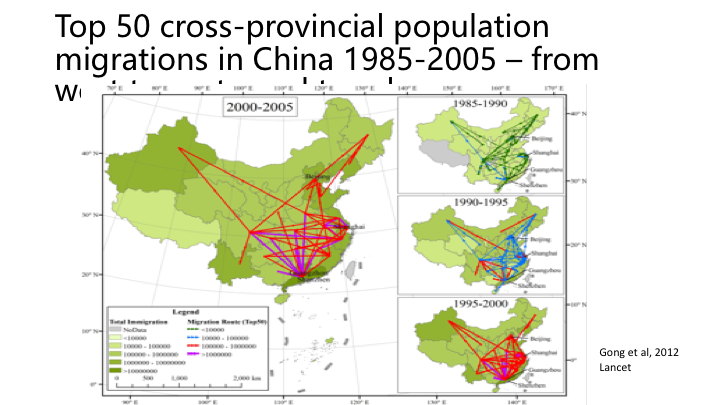 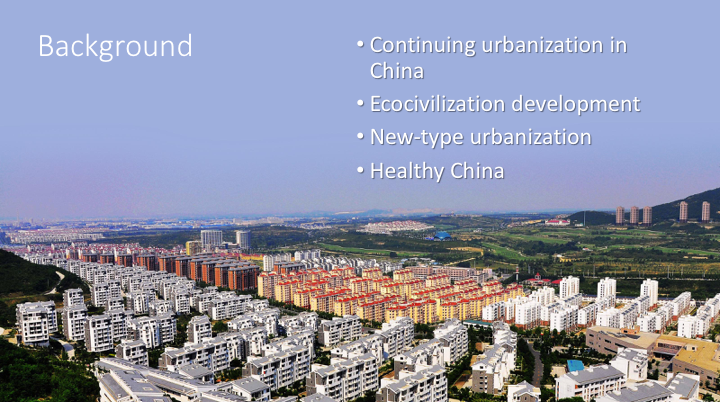 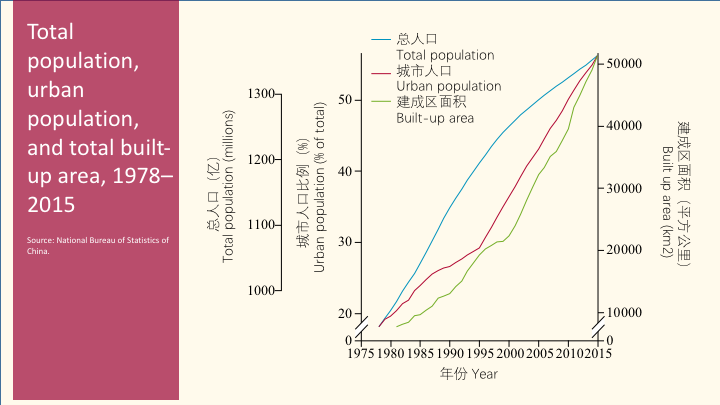 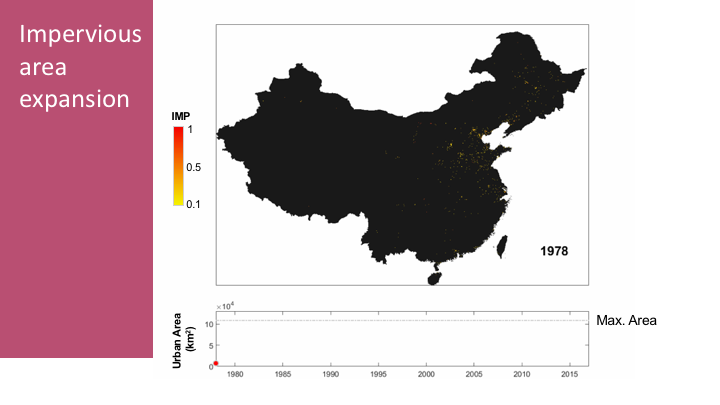 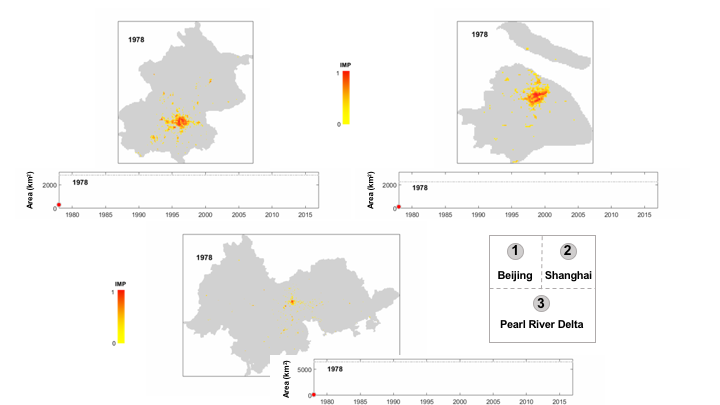 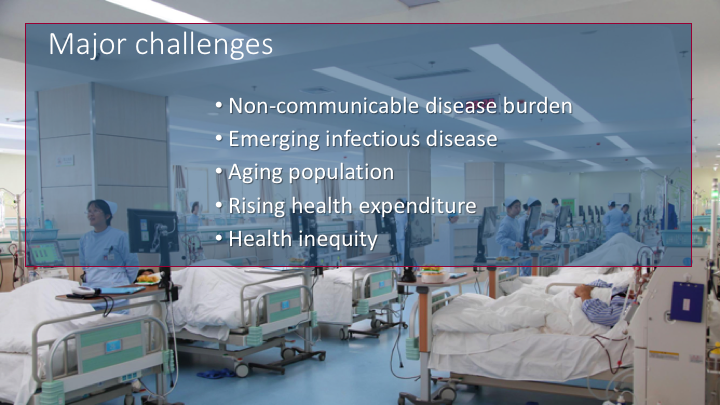 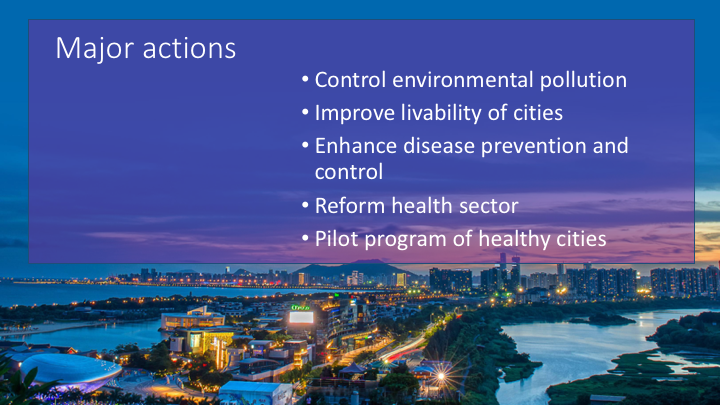 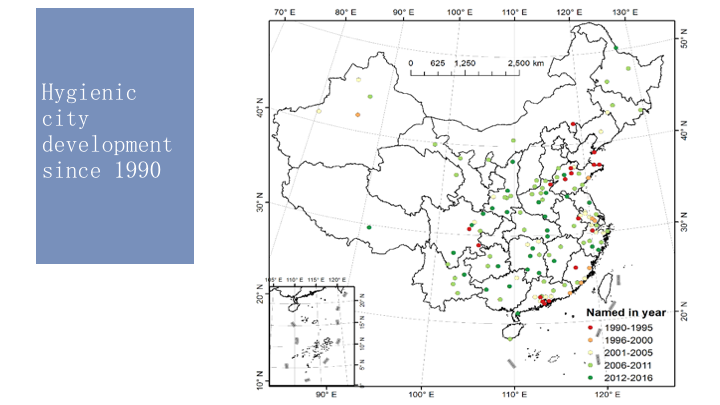 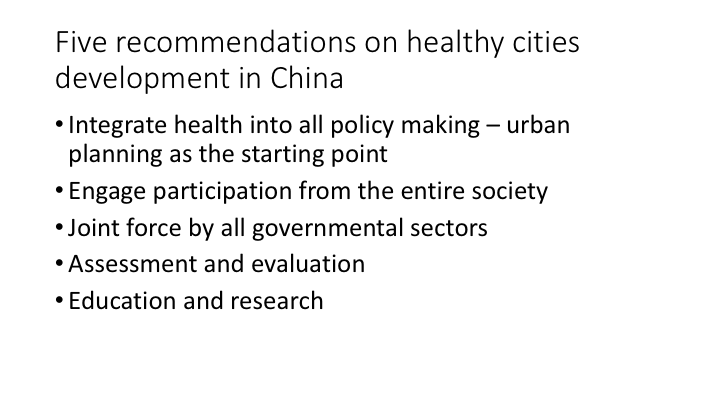 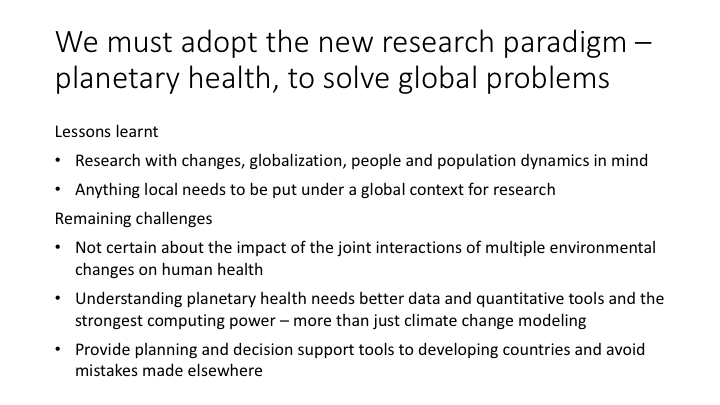 Peng Gong is Professor and Chair of the Department of Earth System Science, Dean of School of Sciences and Vice Chair of the Academic Committee of Tsinghua University (Beijing, China). Before joining Tsinghua, he studied at Nanjing University (1980-1986), the University of British Columbia (1986-1987), the University of Waterloo (1987-1990), and taught in the Department of Geomatics Engineering at the University of Calgary (Canada) between 1991 and 1994, and had been on faculty in the Department of Environmental Science, Policy and Management at the University of California, Berkeley (USA) between 1994 and 2015. He served as the founding Director of the International Institute for Earth System Science at Nanjing University (China), and the founding Director of the State Key Laboratory of Remote Sensing Science, jointly sponsored by the Institute of Remote Sensing Applications of the Chinese Academy of Sciences and Beijing Normal University (2004-2010). His major research interests include mapping and monitoring of global environmental change using satellite and ground based sensors, and modelling of environmentally related infectious diseases.

He published over 500 papers, books and reports, and presented over 200 talks in 33 countries. He pioneered monitoring and modeling of urbanization in the world, hyperspectral remote sensing of vegetation, application of wireless sensor network in environmental monitoring and completed the first 30 m resolution global land cover map in the world. He also developed and applied regional and global analysis technologies in the modeling of the spatial-temporal transmission of such infectious diseases as schistosomiasis, avian influenza, malaria, plague and hanta virus.

He served as the major professor of 27 graduated Master degree students and 51 graduated PhD degree students.  His students and postdocs hold 14 faculty positions in major research universities in the USA and 13 faculty positions in China. His graduate students won many scholarly awards. For example, from 2003 to 2016, his students won 14 student competition awards (including 4 first class awards) in the Remote Sensing Specialty Group of the Association of American Geographers and 4 scholarship awards from the American Society for Photogrammetry and Remote Sensing.

He had been a reviewer for more than 50 academic journals, on the editorial board of more than a dozen journals including the founding Editor-in-Chief of Geographic Information Sciences(now Annals of GIS) (1994-2007), Editor of International Journal of Remote Sensing(1998-2016), Associate Editor of Science Bulletin(2011-), on the International Advisory Board of Lancet Public Health, and Lancet Planetary Health.

From 2004 to 2006, he was one of the nine members on the Board of Overseas Advisors to the Ministry of Science and Technology of China. He won the 1994 Talbot Abraham Grand Award from the American Society for Photogrammetry and Remote Sensing, the 2008 Outstanding Contribution Award in Remote Sensing from the Association of American Geographers, one of the distinguished teacher awards from Beijing City in 2013, and one of the 10 Outstanding Author Awards in 2016 from the Joint Board of Science Chinaand Science Bulletin.

Global Governance: A Necessity for our Times

Present State of the World

No Such Place As “Away”: Plastic Pollution in the Oceans, Why We Should Care, and What to Do About It